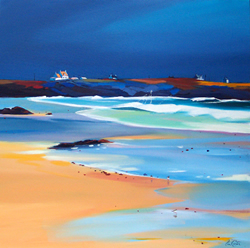 Born in Tanganyika, East Africa to an Austrian mother and Scottish father, Pam moved to Scotland at the age of thirteen. Studying at Glasgow School of Art in the seventies, she began teaching from the mid-eighties in various colleges including Falkirk College and since 2004 has been painting full time.

Pam has exhibited throughout the United Kingdom including solo exhibitions in Glasgow, Edinburgh, Aberdeen, Oban, Harrogate, Stow on the Wold and in London.